Chris has diverse experience creating effective, award-winning visual communications as a graphic designer, web designer, science museum exhibit researcher/writer, science journalist, and publications director for an association of hands-on science museums. After receiving a National Science Foundation Graduate Fellowship, Chris earned a Ph.D. in sociology from Cornell University with emphasis in mass media and sociology of science; her dissertation examined coverage of occupational health in the mainstream and alternative press.

In the first half of her professional career, Chris was a researcher/writer at Chicago’s Museum of Science and Industry; an editor at JAMA Medical News; an editor covering social science at the Chronicle of Higher Education; a freelance writer published in such magazines as Psychology Today and Health; and publications director at the Association of Science-Technology Centers. Her writing was recognized with numerous awards from organizations including the Chicago Medical Writers Association and the American Psychological Association; Chris also received two fellowships, from the Woods Hole Marine Biological Laboratory and the Knight Center for Specialized Journalism.

After developing an interest in the visual side of communication, Chris studied design at VCU, and worked as a designer and art director at two design studios, and as a freelance contract designer, during which time she worked on print and web projects for clients including the National Science Foundation, NIH, and AARP. Her work as a print and web designer has been recognized by the DC-area Art Directors Club and the Society of Technical Communicators, among others.

Chris believes in the power of information hierarchy, content planning, and content strategy to inform designs that communicate in a compelling way; “design from the content out” has become her mantra in the age of responsive design.

Outside of work, Chris takes printmaking and crafts workshops, collects new and vintage wind-up toys, push puppets, and metal tins, and plays a mean game of basketball. Under the umbrella of www.girlmeetsart.com, she creates and writes about crafty projects and the creative process. 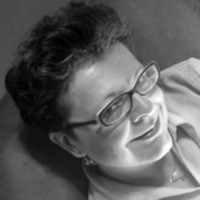