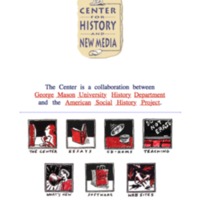 Showcases the aesthetics of the CHNM website from 1998 through today. 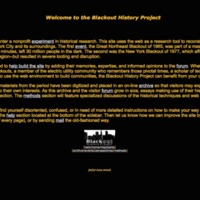 In response to the terrible events of Septemeber 11th, the American Social History Project at the City University of New York Graduate Center and the Center for History and New Media at George Mason University created the September 11 Digital Archive. Its purpose is to collect, preserve, and present the history of the attacks on New York, Pennsylvania and Virginia. Funded by the Alred P. Sloan Foundation, the Digital Archive will also provde a way of assessing how history is being recorded and preserved in the twenty-first century.

This exhibit attempts to provide context for the September 11 Digital Archive. How does the digital archive "fit" into the story that is CHNM? How has it been influenced by prior projects and how has it lead the center towards new projects? In this way, the exhibit is more on the Center for History and New Media and its story as it relates to the September 11 Digital Archive. 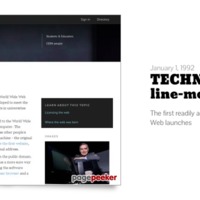 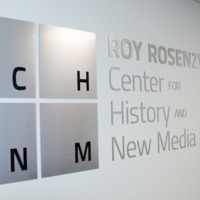 On November 8, 1800 the War Office experienced a fire which destroyed the papers, records, and books contained there. The history of the War Department from 1784-1800 was thought to have been lost for two centuries. The Papers of the War Department has brought together these once lost documents into one freely accessible online collection.

Without the Papers of the War Department, these documents which constitute the first archive of the Unted States, would have remained scattered accross hundreds of archives and collections. With the original leadership of Ted Crackel and later the staff at RRCHNM, these important documents which help researchers discover the country's beginning are now easily accessible. 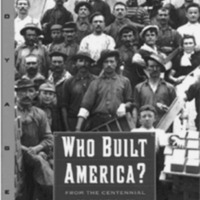 History Matters arose from the CD-Rom Who Built America and led to the development of Teaching History, World History Matters, Children in world history, the Making of 1989, and Teaching American History. The importance of teacher training to make more substantial use of these source materials is a sometimes overlooked part of the project.

In 1998 when it was invisioned, access to primary sources alone was very significant.  The focus of putting evidence of the life of ordinary people was a outgrowth of ASHP and Roy's interests and multi-media was particularly suited to the focus on history form the ground up and promoting critical historical thinking. 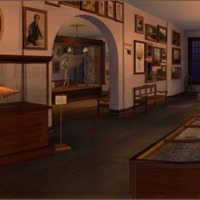 The Lost Museum is an online historical game built between 2000-2005 through a collaboration between the Roy Rosenzweig Center for History and New Media at George Mason Univeristy and the American Social History Project at City University of New York. The game guides users through an immersive, 3-D re-creation of P.T. Barnum's American Museum. In 1865, Barnum's museum was burned down and the crime went unsolved. Players of The Lost Museum are asked to investigate potential arson suspects as they travel through four rooms in the museum and consult various sources in a historical database. By attempting to solve the mystery, players gain a better understanding of the social, poltiical, and cultural landscape of 19th century life.

The Lost Museum was part of a moment in the late-1990s and early-2000s when new media, particularly in the form of CD-ROMs and the World Wide Web, made possible new and creative forms of historical storytelling. This exhibit explores the imagining, funding, and building of The Lost Museum, and considers the role of historical gaming in the digital humanities today.

This project owes much to a compilation of publicity for and reflections about The Lost Museum that can be found on this page. The holes that couldn't be filled by those sources were filled by Josh Brown, executive producer of the project, who shared with me his time and insight into the development of The Lost Museum.

Play the game here, or continue to the first section of this exhibit, Imagining The Lost Museum.

The Object of History 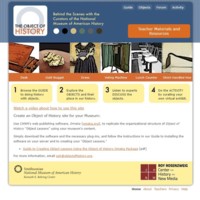 Between 2005 and 2008, Smithsonian’s National Museum of American History (NMAH) and George Mason University’s Center for History and New Media (CHNM) collaborated to produce the Object of History project: a low-cost online resource for teachers and students of U.S. history to develop an understanding of material culture as historical evidence.

The Object of History provides online access to six objects from NMAH’s collections through interactive “3D” photographs, contextual information, related historical documents, and relevant resource links for each object. The site also connects teachers and students with the expertise of curators and historians through interviews about each object and its historical context. Additionally, the project serves small museums seeking to enhance their online educational programming by providing a free and easy-to-use template for creating their own versions of the Object of History.

Making the History of 1989 was launched in 2009 by George Mason University's Roy Rosenzweig Center for History and New Media (then known as the Center for History and New Media). The project was conceived as a means of teaching high school and college students the revolutionary events which preceded the fall of the Soviet Union. Making the History 1989 showcases source materials covering Eastern Europe's social, cultural and political events and their global impact. The project was designed to teach students how history is made by historians, how evidence is analyzed and how narratives are crafted.

Histories of the National Mall 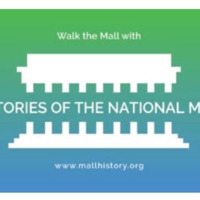 Each year, over 25,000,000 people visit the National Mall. These visitors experience what seems to be a deliberately planned landscape connecting the museums, monuments, and memorials that celebrate the history of the United States. However, the Mall has a hidden history as a contested public space, and there is little publicly available information on the landscape itself to inform visitors of its evolution through time.

The Roy Rosenzweig Center for History and New Media, funded by a $304,565 grant from the National Endowment for the Humanities, created the Histories of the National Mall project to connect Mall visitors with this landscape’s invisible history.