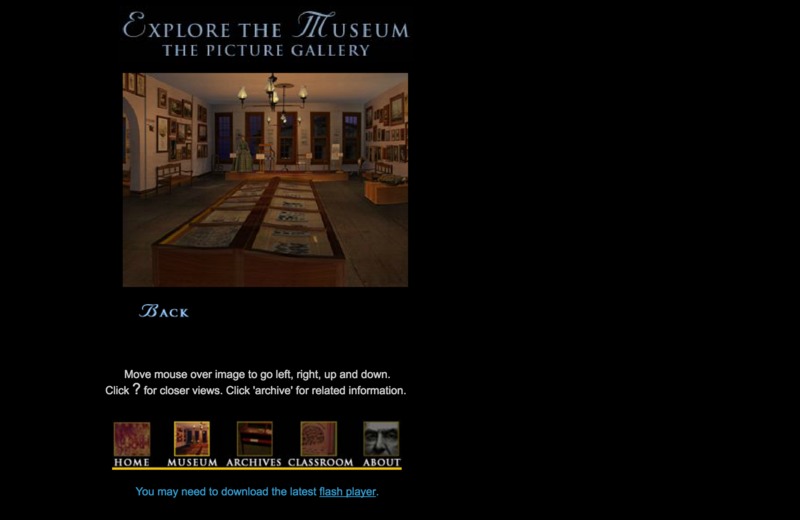 The original interface of The Lost Museum. Early bandwidth constraints resulted in a small gameplay window and basic interface.

The interface of The Lost Museum after the 2015 redesign. The gameplay window was enlarged and a navigation map was added as a side panel.

In addition to content experts, The Lost Museum team consisted of several designers and programmers, including many undergraduate and graduate students, who rendered the virtual space of the museum. The database of primary sources was housed on the CHNM servers, while most of the 3-D modeling and design work was done primarily at the ASHP. After building the prototype of The Picture Gallery, NEH’s production funding allowed the team to develop more rooms and populate the database with more content. A timeline from an earlier version of the website shows how the pieces fell into place slowly and unevenly over time, until the project was completed in 2005. As executive producer Josh Brown notes: “we were discovering what we were doing as we were doing it.”

The unevenness of The Lost Museum's development resulted from many factors. Intially, the team used a combination of SoftImage, Photoshop, and Flash, described here in more detail, to build each room. These technologies were new, the learning curve was steep, and the reliance on student work combined with other responsibilities of the team inevitably made the process slow-going. However, a new program called 3-D Studio Max was released by the time the team began to build Barnum’s Office and the Lecture Hall, so these last two rooms were completed much more quickly than the original Picture Gallery and Waxworks Room. Also part of the development process was the creation of Flash movies and audio tracks to deepen the immersive environment and guide the players through the space. Therefore, musicians, sound effects artists, and voiceover actors are another part of the team, and the production of these audio and visual elements contributed to occasional stalls in progress. By the time the project wrapped up in 2005, The Lost Museum boasted four rooms that immersed viewers in the sounds and sights of a long-lost space, as well as a fully-searchable database that grounded this space in a particular historical moment.

The project remained in stasis until 2015, at which point it was clear that the tools used to tell Barnum's story had grown increasingly obsolete. To begin a series of updates, The Lost Museum was switched over to ASHP’s servers, which was now capable of housing the entire project. The biggest concern was replacing the project’s reliance on Flash, an unreadable platform for many devices by 2015, with the more universal HTML5. In addition, the game’s interface was updated to respond to new technologies such as high-speed internet and tablet interfaces that didn’t exist during the project’s initial phase of development.