As users investigate the various objects inside The Lost Museum looking for clues, a Flash video is occassionally triggered that introduces a potential suspect in the arson, and guides the user towards new areas and new clues.

As users look around the room, the "Show Hotspots" prompt at the bottom of the window reveals which objects can be clicked on for a closer look.

While taking a closer look, the "Archive" button apepars at the bottom of the window allowing users to enter a connected database. 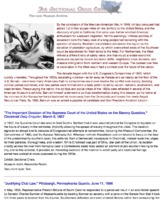 The databse provides a range of primary sources and contextual information to ground the experience of gameplay in a particular historical moment.

Since its destruction in 1865, P.T. Barnum's American Museum had existed only in the imagination. New media offered the possibility to virtually rebuild this lost space, but also raised unique sets of questions. In particular, what did the museum look like and what was inside? The production team consulted with a group of ten content advisors to attempt to answer these questions. These professional academics brought expertise in History, English and American Studies, fields where you could also find some of the earliest adopters of digital humanities projects. Many of these advisors also contributed to a wave of publications around the time of The Lost Museum's development that explored 19th century social and cultural history, and particularly P.T. Barnum himself. These professional academics would have been familiar with the issue of source scarcity, particularly when researching the 19th century. In the case of Barnum, no photographs existed of the inside of the museum, and the majority of exhibited objects were lost in the fire. However, source scarcity creates different issues when working in highly visual media like documentary films or gaming. Therefore, the team was faced with a challenge to reimagine the details of Barnum’s American Museum. In this process, engravings, newspaper reviews, and brochures for the museum provided some insight. Where sources left gaps, developers were forced to make informed creative decisions.

Aside from recreating the space, these content advisors also contributed to The Lost Museum database. After early testing of the CD-ROM prototype at CUNY’s New Media Lab, developers realized that users enjoyed solving the mystery, but the "active learning" philosophy at the core of the project got buried in the gameplay. The chosen solution was to build a database that allowed users to move around the virtual space of the museum, examine objects of interest or "clues," and then link out to primary sources that provided more information about the historical significance of the object. It is this integration of virtual space and database that won the project the New York Metropolitan Archivists Roundtable Prize for “the most innovative application of archives to the Internet” in 2000, among other awards. Continued flexibility while building The Lost Museum allowed developers to respond to practical issues such as the expectations of funders, leading to “The Lost Museum Classroom,” and users, leading to “The Lost Museum Database.” However, this fluidity also allowed the team to experiment with more theoretical ideas of shared authority and nonlinear narrative that were central to the development of digital humanities.