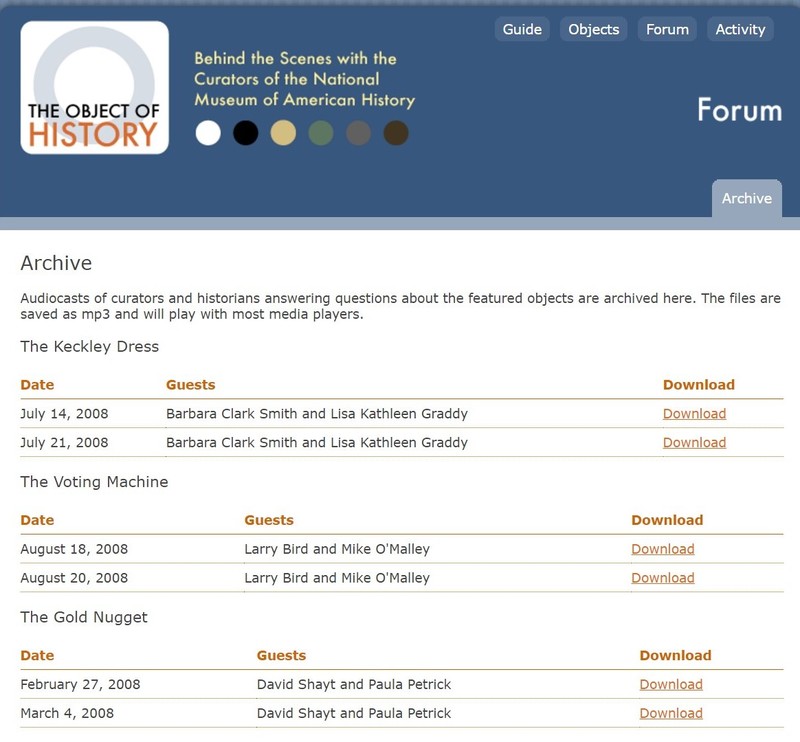 Partial screenshot of the Forum page of the Object of History website, where all of the audio interviews with curators and historians are available. In response to low listenership of the first few live audiocasts, project staff decided to drop the live aspect and switch to uploading audio recordings.

Live chats with NMAH curators were a significant part of the original plan for the Object of History. For each of the six objects, a curator was going to be available for one hour every Friday for four weeks to answer questions, submitted in advance by students and teachers, about the object and its historical context. These would then be archived on the site. In Spring 2007, the Object of History followed this plan, completing four live audiocasts each for Woolworth’s lunch counter and the short-handled hoe. In the process, project staff found that question submission was low and decided to reduce the number of audiocasts to two per object. Assessments of website traffic also revealed that most classrooms were listening to the archived versions, rather than listening when they were broadcast live. For this reason, they decided to switch to uploading audio recordings without doing live broadcasts. The archived live audiocasts and the uploaded recordings are all available on the site.

Although the idea of live chats was popular at the time, their experiences revealed the difficulty of synchronizing these events, at least in 2007. Today, with wider availability of laptops and tablets in classrooms and with improved live webcasting technology, a similar project might not run into the same limitations.