When RRCHNM acquired the project in Fall 2005 from the NHPRC, they envisioned a future for PWD different than Crackel's original design. As a result of an increasing awareness and use of the web by the general public, and continuing RRCHNM's tradition of providing open access content online, the Center decided to present the content through the web instead of using DVD-ROMS. This change allowed the Center to disseminate the content more quickly and efficiently at a cheaper cost. In 1994, no one would have been able to predict how wide-spread use of the web would be a decade later. The staff's choice to switch the presentation of the material show just how much time had passed since its beginning. As the staff has said about this decision, “We believe that this is the future of documentary editions, and we see this project as blazing a trail toward open access to the nation’s documentary heritage—one of the first documentary edition projects to publish solely on the web and to adopt a model of free public access to all of its products. “ 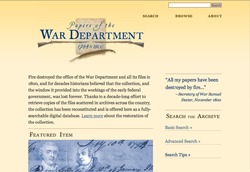 In order to load all of the content online as quickly as possibly, the PWD staff decided to focus on Data Entry I (author, recipient, and date) for each document and post-pone Data-Entry II (names, places, events, themes). This allowed for the launch of the PWD website in June 2008. Once the content was all online, they were able to acquire additional funding in order to complete Data Entry II. The War Department documents were online for the world to use; however, there was still so much information in the documents researchers would need to sift through. In order to create a more useful digital collection, the documents needed transcriptions. In fall 2010, the Center applied for funding to the NEH for the creation of Scripto, an open source transcription tool. After working on the development of Scripto for a year, the crowdsourcing aspect of PWD was released on March 17, 2011.